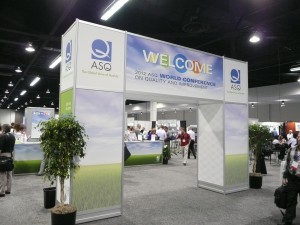 As we wrap up the ASQ conference here in Anaheim, CA, I’m left with an empowering sense of passion for the quality community and their sincere commitment to spreading the word and making the world a better place.   As an ASQ Influential Voice, I was fortunate enough to help spread the word throughout the conference via our social media network.  I was also fortunate enough to meet several other Influential Voices that are doing their part to “raise the voice of quality.”

The conference was packed with over 100 sessions to choose from.  From “Answering Today’s CEO Challenges to Quality” to “Integrating DMAIC Controls in the Outsourcing Life Cycle” to “Cost of Poor Quality: Dimensions  for Failure Analysis,” I’ve certainly added value to my body of knowledge where quality is concerned and will incorporate what I’ve learned into our operations at Pro QC.

The keynote speakers did a fantastic job! James Albaugh, CEO at Boeing Commercial Airplanes, made an excellent point when he noted that “people need to understand the consequences of not doing something right.” He also noted something particularly close to home for the Pro QC team, which is that “making the right decisions is not enough.  You have to have the right culture.”   We have worked very hard to create a culture of quality, and it’s certainly a competitive advantage we are proud of.

Carletta Ooten, VP & Chief Quality, Safety and Sustainable Operations Officer at Coca-Cola, addressed their strategic focus areas and 2020 vision.  She hit the target by noting their objective is to “protect the brand through strong quality governance and driving continuous improvement through quality excellence.”  I also appreciated her comment that “sometimes the simple things are best.”

Simon Sinek, noted author, gave an inspirational keynote that touched on organizational and personal leadership.  “It’s not about what we do.  It’s about what we believe.” And, he inspired the audience to realize that “it’s not what you do, but why you do it.”

As the conference comes to a close today, I look forward to reviewing my notes and posting additional insight and knowledge learned from my time with the quality community.

Ralph J. Smith once noted that “engineering is the professional art of applying science to the optimum conversion of natural resources to the benefit of man.”

This week is National Engineers Week, and we wanted to take an opportunity to thank all of our engineers for their commitment and dedication to both Pro QC and the quality industry in general.  When asked what separates Pro QC from competitors, it’s often our skilled and knowledgable team (in addition to our personalized service) that receives mention.

Thank you! We <3 our engineers…

“A scientist discovers that which exists. An engineer creates that which never was. ” ~Theodore von Karman

“The theme for 2012 is based on the projected world population of 7,000,000,000. There are many challenges facing our world that require immediate engineering solutions. The National Engineers Week Foundation delivers programs and resources used by partners locally, nationally and internationally to help the next generation of talent to meet and overcome these challenges.”

One of the most popular articles in our quarterly newsletter is “Get Acquainted”, where we introduce someone on our team and discuss their role within the organization, as well as their backgrounds and interests.

Due to the popularity of this content, we have also incorporated a “The Team” photo folder on our Facebook page so clients and other team members can put faces with names as we coordinate quality & engineering services in over 30 countries.

An open invitation recently went out via the ASQ Tampa-St. Petersburg LinkedIn Group regarding an upcoming APICS meeting that would include a plant tour of Aerosonic Corporation.  I grew up with Aerosonic right around the corner, so I couldn’t resist the opportunity to poke around and learn more about they do.

It turns out that Aerosonic Corporation has been making “gizmos for airplanes” for over fifty years.  More specifically, their product lines include integrated cockpit displays, sensors, probes, digital and mechanical standby displays. “With its well-established industry presence, Aerosonic maintains long-standing relationships with nearly every major aircraft manufacturer worldwide.” Personally, I was impressed that one of their products, an altimeter, had over 400 parts.  I can’t even imagine how you would organize production on a custom build piece of equipment like that or what a MRP nightmare it would be!  Unlike most of the production I’ve seen, Aerosonic’s products require a great deal of customization and hands-on craftsmanship.

A few years ago, a fire left the company inoperable for about nine months.  The fire not only destroyed the facility, but it ignited a need for change… and so their lean journey began.  They got serious about making real changes and they started by focusing on what they referred to in the presentation before the tour as “wetware.”  I also learned a little about Training Within Industry (TWI) as they attributed this system with their ability to now tie goals with performance.

During the tour, you could sense that the situation before their lean aspirations was bleak.  They described an organization not unlike many small business that were started with the best of intentions but later experienced difficulties adapting to a more “corporate like” environment.  Change management would prove once again to be the most difficult component of transition.  While top management support certainly came through during the presentation and tour, employee resistance was noted as the most challenging component.

It was interesting to see an organization going through this process of change.  It’s a reminder that although being lean may be an arduous process, the results speak for themselves.  By moving to a cellular layout, communication and overall productivity has improved significantly at Aerosonic. Improving inventory management and incorporating employee ideas and suggestions for productivity improvement has contributed significant gains as well.

I want to thank the local APICS chapter for extending this invitation and Aerosonic for opening their doors and providing an honest and realistic portrayal of the lean journey in action.  They are very fortunate to have such a passionate group of individuals in top management to lead the way!

The American Society for Quality posted this to Facebook today, and I couldn’t help but reminisce my own experience at the show earlier this year.  More information from my time at the conference is noted in my blog.  The passion ASQ members have for their industries and quality, in general, was inspiring, and it makes me very proud to participate as a global voice for quality.  I’m hoping to see everyone again in Anaheim next year!